The Smiler – What Could Have Been! 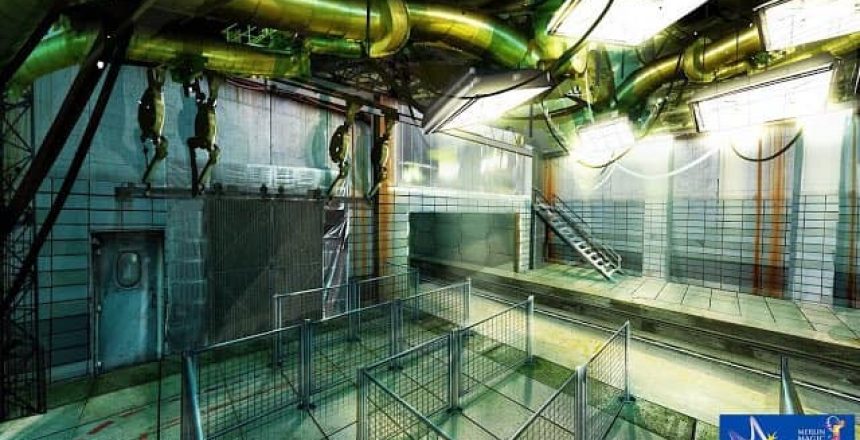 The Smiler Aka. Secret Weapon 7 and What Could Have Been!

The Smiler opened at Alton Towers Resort back on the 31st of May 2013 as the world’s first 14 looping roller coaster.

The ground breaking ride was manufactured by Germany based ride manufacturers Gerstlauer Amusement Rides and took the record for the most inversions found on any roller coaster worldwide at the time of opening!

When it comes to the ride’s themeing however, it’s fair to say that the end result and the original concepts for the ride differ very drastically in comparison.

The story behind the attraction places medical megalomaniacs The Ministry of Joy at the heart of the story as they attempt to permanently open the hearts of all who take the ‘procedure’ to a everlasting state of euphoria (hence the tagline “Open Your Heart To Joy)!

Sadly though, their sinister mission doesn’t quite pan out the way they planned it and a whole different entity is born in the ashes.

The ride’s gigantic centerpiece (a common theme among most Secret Weapons nowadays) known only as The Marmaliser is gigantic, steely spider-like entity designed to ‘administer’ 4 very different procedures which aim to marmalise all who ride.

When you look at the original concepts for the ride and the level of detail we were supposed to get, it’s fair to say the difference between the two differ quite dramatically!

What Could Have Been!

The Smiler and it’s station building were originally planned to be much more reminiscent of an abandoned medical facility as opposed to the minimalist, sci-fi inspired facility we enter today.

Featuring a heavily industrial overlay, the station was designed to be much more akin to an abandoned mental hospital and would have featured tarpaulin wrapped walls and doors, rusty fences and cracked tile walls throughout.

The Smiler’s station however felt more inline with the original concept envisioned for Oblivion – a sinister, abandoned government facility.

Ultimately, had the resort gone with the ride’s original concepts we would have endured a far more immersive, sinister experience overall.

Ultimately, we can only really speculate , however we would imagine it will more than likely boil down to finances.

Themeing of this level would have been costly and would have taken the ride beyond the budget Merlin would have more than likely allocated to the project overall.

When you look at most UK attractions (especially at Merlin owned theme parks and attractions) they appear to be designed to either do one or the other.

Of course, this isn’t always true and there are still alot of other attractions located at UK parks which still achieve both such as Saw: The Ride and Wicker Man.

It’s no secret though that when it comes to fitting the bill of the original concept, there aren’t very many UK rides that have managed to achieve it.

Ride’s such as The Swarm at Thorpe Park and Wicker Man at Alton Towers have however come very close indeed.

Which Version Would Have Been Better?

When you take into consideration just how minimalist the Smiler’s themeing is in comparison with the original concept sketches there’s no denying the original version would have been far more preferable.

Once onboard though you tend to forget all about the theme and focus much more on the experience as opposed to the themeing elements surrounding it.

That being said, The Smiler still features a fair amount of themeing and unique elements throughout which all help to deliver a thrilling, yet aesthetically pleasing experience overall.

The Marmaliser definitely reminds me of a giant, twisted 70’s TV mast and as such never fails to amuse me each and every time I see it.

Also, the way the track twists and weaves in and around itself is mesmerising an never ceases to grip my attention every time I see it (honestly, I could sit and watch the ride go around for hours)!

Ultimately, even though the original concepts never came to fruition we still ended up with a very unique and solid attraction overall.

So, which version of The Smiler would you have most liked to see? The Original, dystopian clinical version or the current minimal, industrial version?

Why don’t you “Join Us” and share your thoughts below?