Flamingo Land – The Rides of the Past! 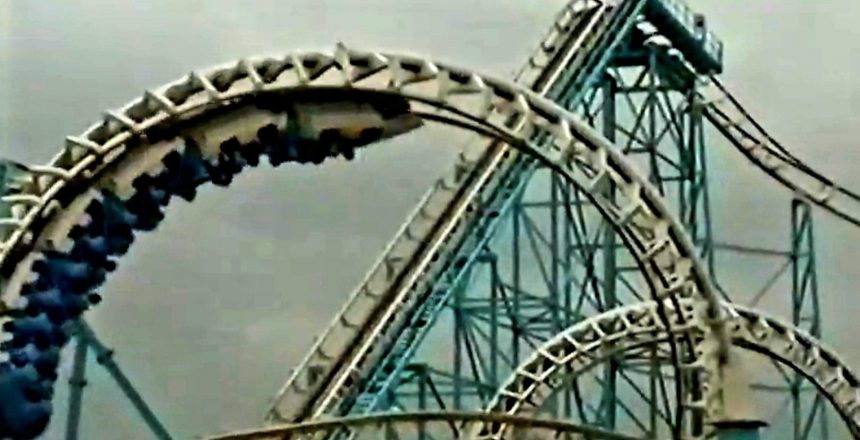 We take a look back at Flamingo Land's Rides of the Past!

When it comes to Flamingo Land there is always one era in particular which stands out the most as being what we would consider to have been their golden era! The 90’s!

With so many iconic rides and roller coasters to choose from it’s safe to say a day out there always left you with so many new and exciting memories to cherish.

Corkscrew, Bullet and Magnum Force were just some of the goliath sized attractions on offer at the time, however it wasn’t just the rides that left a lasting impression on us either?

Aside from the rides and attractions there was of course the wonderful onsite zoo (which of course is still open and operational to this day!).

Throughout the 80’s and 90’s alot of very memorable rides and attractions were added and removed, however there are certainly those which stood out alot more than others!

There were however just as many iconic none roller coaster rides at the park at that time too as there were coasters and some of these definitely left their mark on all those who rode them.

Out of all the rides featured in the 90’s there was one which to this day was the ONLY ride to ever put the fear of god into us, and that’s Terroriser – a monstrous inverting pendulum ride!

Terroriser would take you up to around 100ft and then hang you there upside down (until you turned purple) before rotating and swinging you back and forth in both directions.

In a word – TERRIFYING!!

There were of course many other iconic rides and roller coasters located at the park during the 90’s too!

Flamingo Land certainly had some truly unique rides and experiences that’s for sure!

Our All Time Favourite!

Out of all the rides we had the pleasure of experiencing throughout the 90’s, there was of course one which we will always cherish our memories of most, and that’s Magnum Force!

Magnum Force (aka. Drier Looping) was genuinely a force to be reckoned with!

Reaching speeds of up to 53mph, reaching heights of 111ft and inflicting an eye watering 4.7 G’s this classic Schwarzkopf coaster was definitely not for the faint of heart!

The amount of force you pulled at the bottom of the first drop alone was enough to make you second guess your choice to jump on in the first place!

This incredible ride is of course now due to open at Indiana Beach in the US as the park’s most thrilling new addition Triple Loop and will be fully reconditioned following recent tragic events.

Experiences of the 90's

It wasn’t just the rides and attractions that continued to draw us to the resort time after time either!

Throughout the 90’s Flamingo Land’s entertainment offering was just as strong as it’s ride line up, and with the likes of Professor Bubbles on offer it’s easy to see why Flamingo Land fastly became the park to visit.

The Zoo was of course the main draw for many families and still remains the case today.

Along with the huge variety of animal exhibits the park also offered daily animal shows and this is also something which still carries on to this day as well.

In it’s earliest years (late 60’s to the early 70’s) the park had also played host to the UK’s first ever captive Killer Whale named Cuddles (definitely an inapt name in hindsight), however Cuddles saw relocation in 1971 to Dudley Zoo instead due to an ongoing feud with his tank mates – a pair of bottle nosed dolphins.

Overall, it’s fair to say that entire day could well be spent just looking around the zoo without even getting on the rides attractions at all.

Our Fondest Memory of the park!

There will always be one visit in particular which will always stick out most in our memory and that’s our visit on Magnum Force’s opening day!

Now don’t get us wrong, Flamingo Land had had some pretty solid additions prior to this with Corkscrew and Thunder Mountain alone being some of the best, however Magnum Force took the park up to whole new level entirely!

That day we were visiting with friends, and as we stood quivering in the queue line looking up and monster in front of us, we knew this would be something quite special.

The sheer feeling of exhilaration after conquering it was amazing, and that feeling only amplified further after finally braving Terroriser too!

We would go as far as saying that day officially saw us reborn as a genuine thrill seeker and for that reason this day will always hold a very special place in our heart!

Yes, for Flamingo Land the 90’s really were the perfect decade to visit, however with that being said the introduction of ‘Inversion’ this season (fingers crossed haha!) will almost certainly put our home park back on the map in the years to come!

We would like to offer very special thanks to one of our biggest followers George Whitelaw for providing this absolutely fantastic images to be used in conjunction with this article.

Do you have any favourite memories of Flamingo Land? We would love to know! Why not share all of your favourite anecdotes in the comments below?