What makes Duel – The Haunted House strikes back the perfect addition to Alton Towers?! 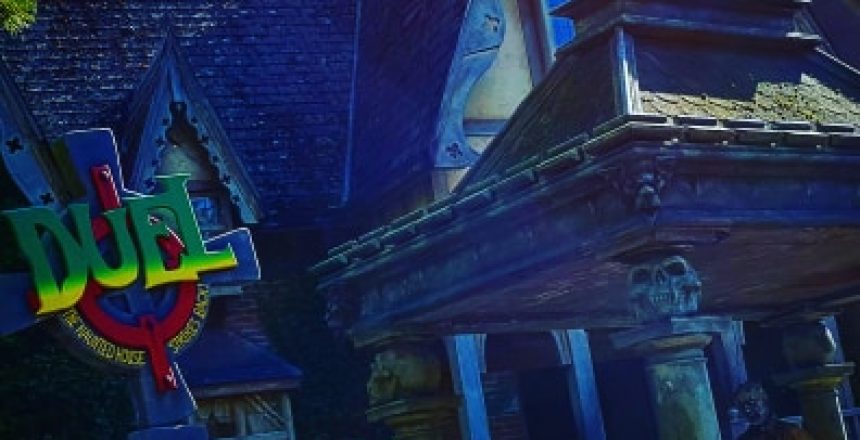 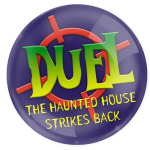 What makes Duel - The Haunted House strikes back the perfect addition to Alton Towers Resort?!

Back in 1992 something dark and thrilling was about to make it’s debut at what was fast becoming the UK’s favourite Theme Park resort and it wasn’t Nemesis!!

1992 would be the year that would see the addition of 2 major new attractions being added to the ever popular tourist hot spot and the these new additions couldn’t have been any more contrasting if they had tried! Firstly the park added the now extremely popular and very famous Runaway Mine Train which at the time drew in the crowds to the newly re-themed area ‘Katanga Canyon’ and proved to be an instant success with all park visitors alike, and the second? Well let’s just say people were very apprehensive to say the least!

Now this had nothing to do with it being unpopular, however it had everything to do with what guests would face once they dared to step inside! The Haunted House had risen like a corpse from it’s per-verbal grave and now stood menacing all those who dared to approach! Set against the eerie back drop of the park’s other brand new area Gloomy Wood guests would now have the chance to step inside and face their darkest fears as all manner of ghouls and ghosts came out to play terrorising whoever dared get in their way!

This extremely creepy new attraction also proved an instant success and was therefore seen by many as a fitting replacement for the park’s previous ghost train style attraction – Doom and Sons Ltd which had been located in and around what would later become the Alton Towers Dungeon area of the park!

Now, fast forward to 2003! The Haunted House had proved a huge success, however it now seemed that the park wanted to add an additional depth to this already creepy and fairly scary attraction! With the laser gun style interactive attraction becoming increasingly more popular the park decided that the time had come to move this brilliant attraction into the new ear, and thus after closing down and having brand new laser targets and guns applied to the ride Duel – The Haunted House Strikes Back was born!

Now it’s no secret that the popular opinion seemingly circulating amongst most enthusiasts nowadays it that the guns and interactive aspect of the ride spoil the experience, however there are also a lot who would argue the opposite stating that this new interactive aspect offers the chance to challenge your friends and have a much more fun and thrilling time whilst riding! We have to say that as much as we absolutely adore this ride we would definitely rather see Duel without the laser guns and targets! The reason for this is the fact we just feel that having loads of glowing dots positioned throughout the ride just takes away from the overall experience quite considerably! It is also our opinion that this particular type of attractions works so much better when you can’t see anything at all  when it is mean’t to be pitch black, however the additions of the targets definitely ensure this is not the case!

With the story line this attraction tries to achieve it is clear that it would have been far more potent to have had no interactive element at all as this would have made for a much creepier and scarier experience overall, however we can definitely understand why the additions were made and why the park chose to update this attraction the way they did!

Now let’s look at the park overall and what Duel helps to add to the resort! It is clear that this particular park has always been more horror focused and you only have to look at the likes of Th13teen, Nemesis and Hex to realise this is the case! With all of these other rides having much darker and far more sinister themes it was clear that they needed something which would follow the same feel, however would be far more family friendly and would offer guests a horror based attraction they could ride as a family! Duel in our opinion meets all of these requirements.

Even with it’s blatant B-Movie theme and the addition of the questionably creepy queue line this ride still gets absolutely packed out by families on a peak day and we have infact witnessed this for ourselves on numerous different occasions! 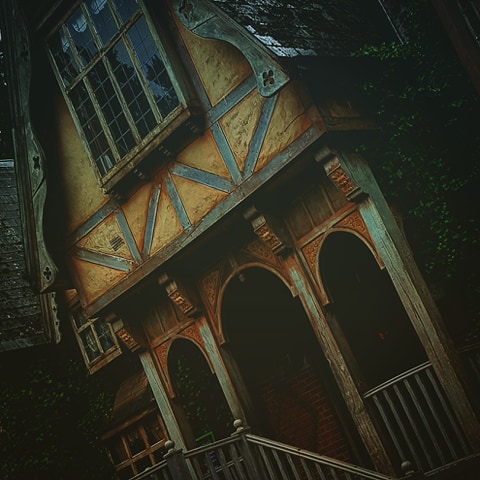 Enter if you dare!

It’s definitely fair to say that this is one ride which has fit in with the park since day one and will continue to do so as long as it stands, however over the years there have been quite a few different elements to the ride which have come to a halt and the most well known of them is the trunnel! This is one element that represents the classic ghost train style the ride attempts to capture and even after the Alton Towers TLC (Towers Loving Care) program made refurbishments to the ride back at the end of 2017 it’s clear that this is still one element which is yet to receive restoration! That being said the park did also listen to the general public as many had stated the ride’s previous soundtrack didn’t quite give the ride the ambience it deserved and thus prior to re-opening a brand new soundtrack was composed and added to Duel by Simon Allen – also known for composing other scores for the resorts ever popular Fright Nights scare mazes!

In our opinion this fantastical and very spooky waltz style score that Duel now has really helps to encapsulate the essence the ride is going for, and that’s ominous and creepy! We also love the newly repainted flying heads and the other little details which have been added to the ride such as the fantastic use of the Aromaprime Scent pods and animated portraits and overall it’s clear that the park are wanting this ride to endure! It’s also clear that they want the ride to be more of an experience rather than just an attraction and again this is evident from the way everything from the exterior queue line to the entrance to the ride and the indoor queue line flow! The narrative is consistently creepy and really helps to put the rides visitors in a permanent state of unease prior to even boarding the ride!

Overall it’s very likely that Duel isn’t going anywhere anytime soon and we definitely hope this is the case! The only thing we would like to see going forward is the return of the one off Scarefest experience that the park offered guests in a previous season and that’s Duel: LIVE!! We really feel like this would be a ride which would still benefit from the addition of a few permanent scare actors placed throughout the ride! This in our opinion would really help to give the ride experience a far more unpredictable feel and further give it the status of a must ride attraction for all when visiting Alton Towers!! Especially if you’re a die hard horror fan like ourselves and love everything horror and horror attraction related! 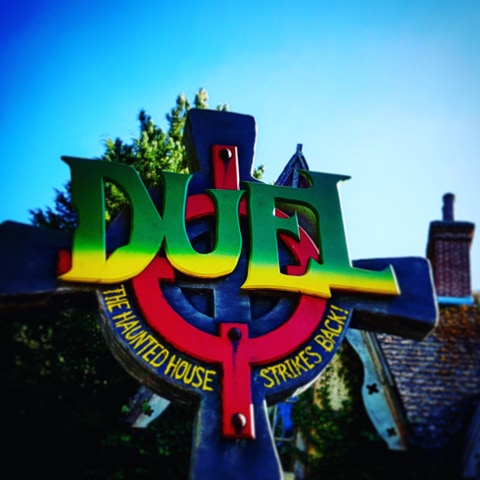 We therefore feel that because of all of the reasons stated above and the fact that the park continue to make updates to this ride is highly unlikely we will be seeing this leave any time soon! This therefore makes Duel – The Haunted House Strikes Back the perfect family friendly addition to Alton Towers and with the fact it’s in keeping with the park’s tradition in it’s style of attraction we will be sure to get as many repeat rides on this as possible in the years to come!

If you have yet to hear the new score for Duel however you can check it out below for yourselves in the below video of the score shared from Mr Simon Allen’s YouTube itself!

Click Here to visit Alton Towers resort's official website and find out more about Duel from the park themselves!