As an enthusiast there is always one certain coaster which will stand out for you the most over all others as being the one ride which played a highly significant role in your journey to becoming an enthusiast! For us The Ultimate located at Lightwater Valley just outside Ripon in North Yorkshire is just that!

This fantastic and very unique addition to this small independently owned North Yorkshire theme park (although technically it really is more of an amusement park in all fairness) has over the years become the park’s most iconic ride and has continued to stand proudly at the rear of the park since it first opened to the public back on the 17th of July 1991!

This gigantic feat of engineering was at the time of conception envisioned as a bold statement by the park’s original owner Robert Staveley to really show just what the park could achieve when it came to building one of the longest and fastest coasters out there, however this was not without it’s own array of set backs and challenges along the way! These included funds running out during the construction process, a change of manufacturers, and issues with the trains not making the total length of the layout to name but a few (Which still happens to this day meaning this park have to employ a JCB tractor to tow the train the rest of the way), however the park’s owner stopped at nothing to bring his vision to life and as such as recently mentioned in July 1991 the world’s Ultimate roller coaster was born! 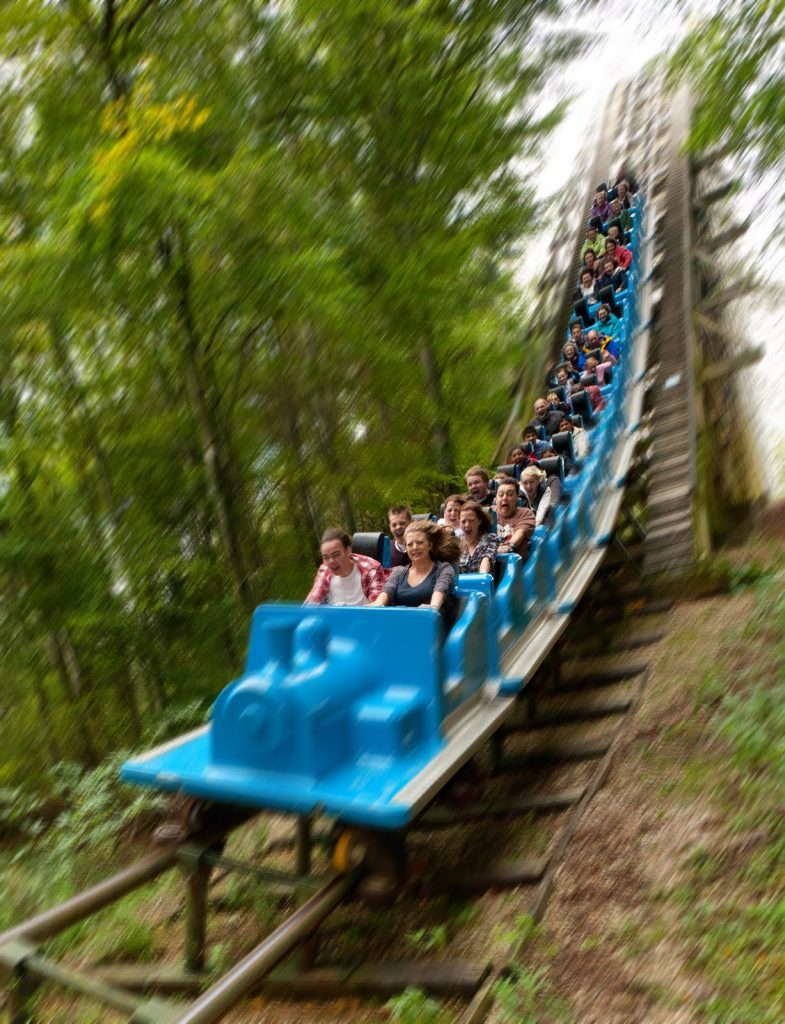 Now, at the time of opening The Ultimate officially boasted a world record as being the world’s longest roller coaster, and this was a record the ride would continue to hold up until the year 2000 when the title was sadly stolen from them by the opening of Steel Dragon at Nagashima Spaland in Japan. The Ultimate does however still remain Europe’s longest roller coaster to this day and this is a record that the park can continue to be proud of in the years to come!

Over the years The Ultimate has also been involved in a small selection of mishaps which have solely involved collisions with wild life (namely deer jumping the perimeter fence), however that being said this doesn’t seem to deter both the enthusiast community and the general public alike from continuing to ride it!

The Second lift hill also boasts some absolutely magnificent views of the surrounding and very picturesque area giving riders views of everything from York at the furthest away to the vale of York and back towards Harrogate on a clear day! If you also look to your left whilst creeping towards the crest of the second drop you can also see right back over to the park as well which proves for a fantastic vantage point in it’s own right!

Now, we have recently mentioned that The Ultimate does indeed hold a very special place in our heart, therefore let us share a few little anecdotes with you!

Whilst growing up my father worked as a road traffic Management Consultant for North Yorkshire council, and this therefore meant that a good majority of his day was spent out on the road visiting clients regarding planning applications which had been submitted for everything ranging from road access to alterations with existing carriage ways and the introduction of traffic calming measures! As such every now and then myself and my brother had the pleasure of being able to accompany him to work for the day (which would likely not still be allowed these days due to changes in practices) and this therefore only meant one thing – dinner next to the Ultimate!! Now, you maybe wondering how this was possible? Well, there is in fact a road which used to run parallel with the coaster’s second drop at the very back of the park! This meant that we would get to watch trains of riders passing by whilst munching on our sandwiches and this to me as a growing enthusiast was like having my all of my Christmases come at once! Also, due to the fact that Lightwater Valley is my local park (In reality, however I class Flamingo Land as this now due to it being the major park for the area!) it also meant that we would always get an annual visit to the park and this was definitely the highlight of our year!

Now, some of you will remember a rather old style of educational establishment known as middle schools? Well, when all UK middle schools finally closed their doors for the last time in 2000 our head teacher at the time decided that the most fitting way to mark the end of an ear was to use a large amount of the school’s remaining funds to take the entire school to Lightwater Valley for the day! This was so well received that even our local newspaper at the time reported on it and took a fantastic picture of the entire school and it’s faculty standing at the bottom the Ultimate’s first drop. Below is the said image which has been recovered from 20 years of storage at my parents house!

Overall this amazing ride has not only helped to  mark momentous occasions throughout my life, but it has also inspired me to become the enthusiast I am today!

The Ultimate was also my first major coaster as well and after years of building myself to ride it, I finally took the plunge (literally haha!) in 1997 and have never looked back since constantly o the look out for the biggest and best coasters I can find!

Now, what can you expect should you choose to ride this for yourself? Well, one thing is a dead certain, you’re not going to forget your experience in a hurry!

The Ultimate is a coaster of two halves! It has a rather tame feel throughout the first half and then is all out nuts on the second! This is due to the contrasting nature of the ride’s two halves and how they are laid out! The first consists of a mixture of some great hangtime over the first drop before plummeting into a mixture of 2 large low to the ground airtime hills, a long length of flat track with a small airtime hill near the end and then finally 4 bunny hop hills prior to the bottom of the second lift hill! The second half however is an entirely different experience altogether and is far more intense, fast paced and downright insane to say the least! 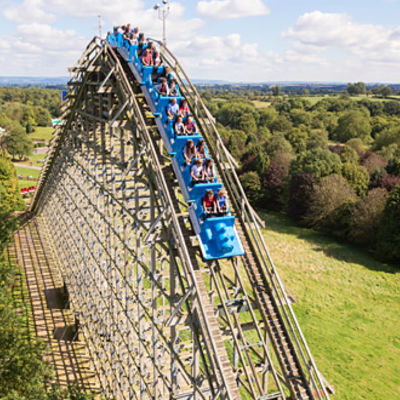 The second half will see you traverse the surrounding woodland at break neck speeds though a mixture of 5 tightly banked turns, another very small, ejector airtime filled airtime hill, an up and down tightly packed figure of eight providing  some fantastic head chopper moments created by 2 enclosed tunnels and a slow crawl up to the ride’s final small lift into the station (which is where the ride famously falls short causing the JCB to be employed!).

Now don’t be fooled, The Ultimate truly is a monster of a ride, and this isn’t purely down to it’s length! For us it’s still one coaster which we find a single ride to be adequate for and this isn’t just down to the queue the coaster sometimes gets! It also comes down to the fact The Ultimate has not aged well at all and the T-shaped lap bars the ride’s trains include! If you’re one of the ones who thinks the Grand National at Blackpool Pleasure Beach is rough, but have yet to ride this coaster for yourself then it’s very safe to say you haven’t seen anything yet!! This coaster is in our opinion a whole other level of rough, and although it’s definitely a very unique experience you could probably go onto it bent double and come off standing up straight as this coaster could quite easily be used as your own private chiropractor! 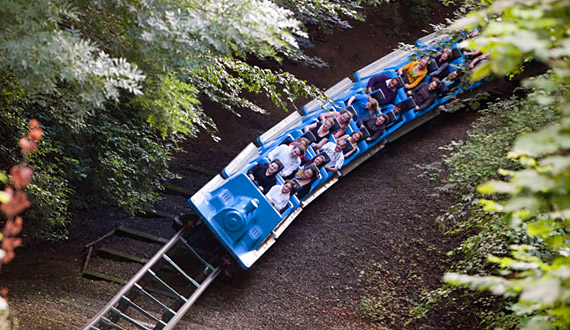 It’s therefore fair to say that The Ultimate really is one on it’s own and as such here are a few ride facts for you!;

– The Ride is a total length of 7,442 metres and this roughly equates to around a mile and a half from start to finish which gives a total ride duration of 7 minutes and 34 seconds overall!

– The Ultimate reaches speeds of up to and including 50 mph which in our opinion given the design of the layout is by far fast enough!

– Both of the ride’s lift hills stand at over 100 ft each with the first standing at 102 ft and the second standing at 107 ft in total overall!

– Although construction was completed in it’s final stages by British Rail the track itself was actually manufactured and produced by a steel works at the time known as Tubular Engineering! 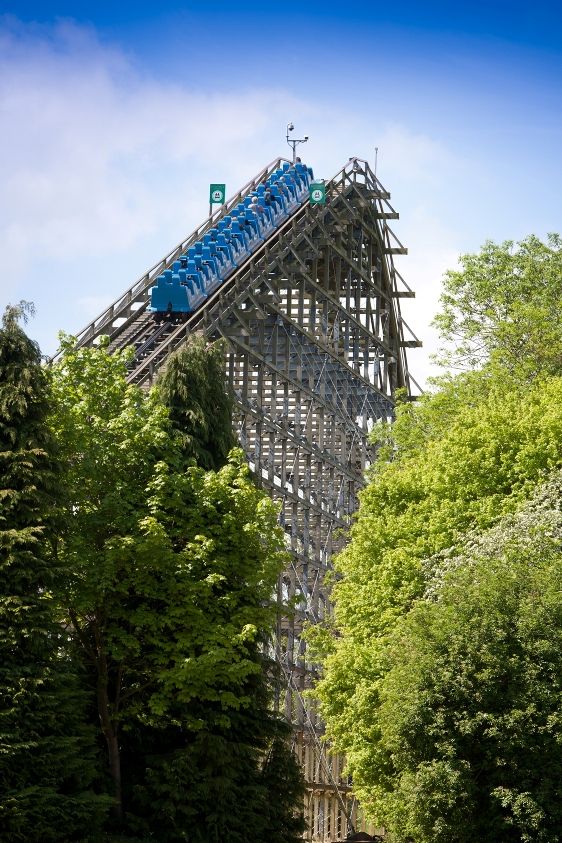 Overall The Ultimate has played a major role in putting us where we are today and as such given the park’s current projection and recent history we would be very sad if this great North Yorkshire park was to close in the near future! That being said if that was to pass then we are thrilled to have been afforded the chance to experience this very unique coaster for ourselves and if the park continues to stay open and operational as we really hope it does then we highly recommend making the trip to try this ride for yourself! 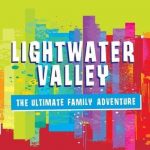 Click Here to visit the park's official website in order to find out more about this awesome ride for yourself! 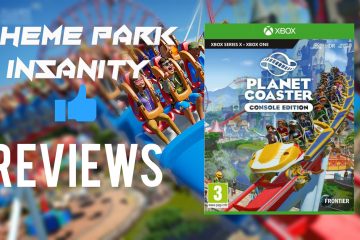 Where to start? It's safe to say that when it comes to this new version of the world renown theme park sim the console edition has both positive aspects and negative aspects to it 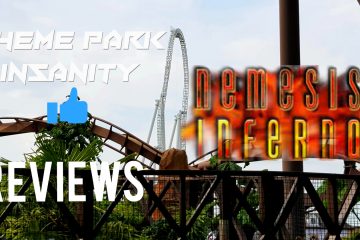 A raging torrent of adrenaline fuelled exhilaration from start to finish this sister ride to the legendary Alton Towers beast of forbidden valley still packs a fiery punch with all who ride her! 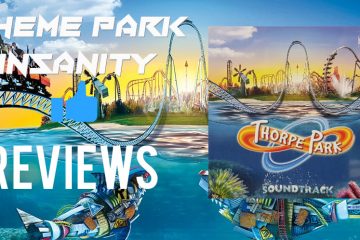 Capturing the punchy and sun drenched tropical vibes of the island like no other the IMAscore Thorpe Park Resort soundtrack brings the feel of the island to your very own front room!